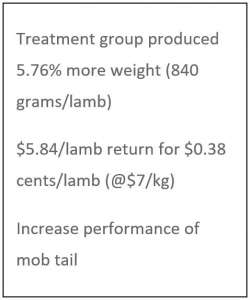 This trial involved 152 crossbred lambs which were initially weighed and ear tagged at marking. They were then distributed into two groups, male and female, with their weights ascending from heaviest to lightest. Finally, they were grouped evenly for the treatment and control, so that the weight distribution was the same (see Initial weight @ marking, Table 1).

On the 30th of May, the treatment group was drenched with 2ml of Ruminant and 4ml of Nutrimol, and released back into the mob of lambs with their mothers and the control group which had received no treatment. The next day all the lambs were marked.

On the 29th August, the entire mob (treated + control) were weighed and the treatment group was drenched with 4ml of Ruminant and 8ml of Nutrimol. This was administered one week* after lambs had been weaned from their mothers. Following treatment, lambs were combined and grouped back into one mob.

On the 22nd November, the entire mob was weighed again with no treatment administered as this was just data collection and was the conclusion of the trial

*Typically the Ruminant drench treatment is anecdotally observed as having behavioural advantages during the initial stages of weaning, whereby treated animals typically experience hunger and focus on eating rather than searching for mum. Due to the delay of a week between weaning and treatment this was not able to be observed.

It is worthy of note that from marking to 8 weeks post weaning there were 9 losses in the control group compared to 5 in the treated group. It was not possible to determine the cause of these loses, whether it was by death or loss of ear tag. Understanding this, we removed 4 lambs from the treated dataset to normalise the data, resulting in comparable datasets with 67 lambs in each group.  By normalising the data we are able to look at what the treatment achieved in terms of weight gain above the control without being skewed by losses

The results showed the treatment group produced 5.76% more weight over all which was a further 840 grams heavier per lamb. At current lamb prices, this is valued at $5.84 more per lamb. 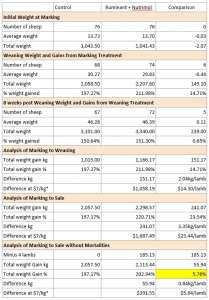 Table 1. Raw data from each weighing and the results of both the treatment and control groups. The difference between the two has been tallied for comparison and summarized in the last column of the table. 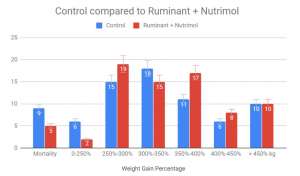 Figure 1. Distribution of the weight gain percentage of the control compared to the treatment.

Our Nutritional Agronomists are here to help you every step of the way. Contact us today

Brands on our Agronomy Programs

Trial Overview This trial involved 152 crossbred lambs which were initially weighed and ear tagged at marking. They were then […]